Some weeks ago I was writing a protocol stack for a serial RFID reader for a commercial project I'm working on. Apart from one command, all the others are standard serial communication where you send a fixed data structure and receive a fixed data structure. But there's this command that does inventory, which means, get all the RFID tags in the area. You request the data and it starts sending many different packets for each tag.

The response format and size can vary but it always starts with a fixed header which can be "RITM", "BITM", "EITM" or "IITM". So I basically wrote a state machine do wait for one of these possible headers to start reading the remaining data (size depends on the header type).

To make it easier I draw the following flowchart: 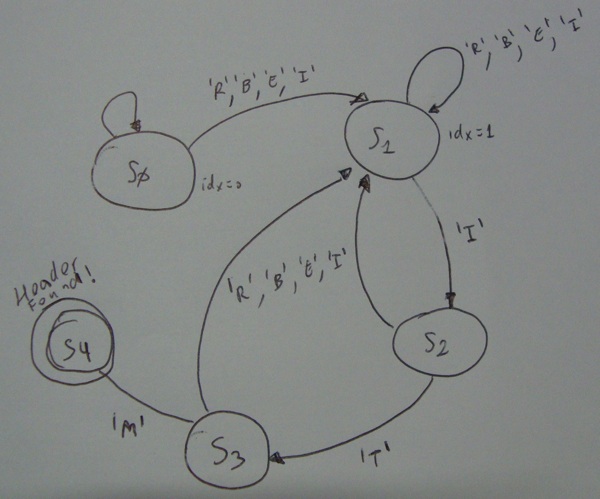 I guess not many people will be impressed by my great drawing skills! Btw, if anyone can suggest me a good flow charting software for free or low-cost I'd be thankful.

The only missing edges on this diagram are the ones that connect all states back to state S0 when an invalid character is received.

The code I initially wrote to solve the problem is shown below:

The function isvalid tests if the character received is a valid starting character for the header strings know.

It worked as expect but it should be clear that it's messy and has a spaghetti structure which could quickly grow into unmaintainable code. The problem is having a case for each state and inside it a nested if/elseif test for the received character.

Towards a better state machine structure

While reading Programming Game AI by Example (great book!) I stumbled across some designs for state machines and in particular one table-driven which doesn't require object orientation and polymorphism. Although the book only gives a rough example, it is clear enough. I previously saw a very similar approach used in lexers where a given input regular expression generates a table-driven state machine.

To get started the first thing I did was to define a struct to accomodate the necessary data. Here's how it looks:

Here's what the declaration of the final state machine looks like:

The element in the second column is a function which will evaluate if this is the valid row. For example, when in state S1 if I_char returns true (by C's definition) then it goes to state S2. Else if initial_char returns true it stays in state S1. The function _true always returns a true value.

The order of the row declarations is important because they are tested from the starting row towards the ending row.

The variable trs_size is the number of elements in the state machine description used in the main algorithm to iterate over all elements.

These are the definitions of the fuctions used in the declaration of the state machine:

The function initial_char returns true if any of the characters valid to initiate a header is found. There is also one function for each of the extra possible characters. _true always returns 1.

And here is the final state machine code!

In the end the code is actually bigger and probably less efficient. But it should be a lot easier to maintain. If I copy/paste it on another project I will only need to modify the state machine array declaration (and probably also the custom data).

Things that could be made better

The is (at least) one thing which could be made better in the newer code. Look at these function definitions below:

As it must be quite obvious, they all look pretty much the same. Only the character tested changes. There should be a way of fixing this with preprocessor macros. I have in mind something like this:

The problem in this code is that preprocessor's concatenation doesn't work inside single quotes. So it generates the correct function name but the test will look like ch == '##c##' instead of the correct character.

I'm not sure yet of how to do it but I'll keep trying!

I just found a way of solving the problem above using stringification as provided by the preprocessor. Not great but it does the job.